Corryvreckan takes its name from the famous whirlpool that lies to the north of Islay, where only the bravest souls dare to venture. Swirling aromas and torrents of deep, peaty, peppery taste lurk beneath the surface of this beautifully balanced dram. Like the whirlpool itself, Corryvreckan is not for the faint-hearted !

“Fresh sea breeze aromas and a distinct prickle from the alcohol. Scents of orange, caramelised brown sugar and raspberries, which come out more with water. Sweet, dense, smoky and salty on the palate. Like biting into charcoal. Sea salt-laced, sticky toffee pudding. Orange oils and a spicy bite – star anise and white pepper, plus some seaweed.”

With the first sniff, encounter the deep and turbulent force of Corryvreckan as it pulls you inwards. Swirl the glass and dip your nose into the torrents of tarry ropes, creosote and linseed oil rising from deep within the vortex. As you succumb to its power, a collision of waxy dark chocolate, warm blackcurrants and muscovado sugar pulls you under its spell with a burst of plump cherries and earthy pine needles leaping from its depths.

Swirl water into the glass, and observe the magical collision of whisky and water. As the liquid warms up, the seething cauldron bubbles and bursts, as you edge closer to sniff a pot full of gutsy cayenne-peppered steak and oysters smothered in hot pepper sauce. Salty seasoning brings a briny character with tangy crisp seaweed and smoky bacon swirling on the surface with hints of sweet vanilla, spicy cloves and blueberries.

As the whirlpool narrows and quickens moving ever deeper, surrender to its dangerous depths with the heady force of menthol, treacle and chilli sauce.

Taste : Plunge into the whirlpool and taste the mysterious depths of Corryvreckan. Torrents of taste well up on the palate; deep, peppery and chewy, bombarding the tongue with its intense tastes and textures.

The first plunge brings forth chewy peppered steak soaked in pepper sauce with the tang of crispy seaweed. As you descend deeper, encounter a mouthful of black tarry espresso coffee that coats the palate with rich melted dark fruits (blackcurrants, blueberries and cherries) and bitter almonds. As the taste soaks in deeper, star anise and hickory dry out the palate before a surprise of chalky effervescent violets fizz to the surface.

Finish : Long, deep and remaining powerful into the finish with black tarry coffee, chocolate coated cherries and hot pepper sauce, the lingering memories of your mysterious and daring journey into Corryvreckan. 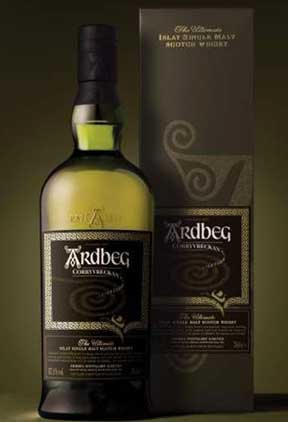