VALKYRIE is the first in a series of three special Viking Legend releases and has just been awarded the Chairman’s Trophy in the 2017 Ultimate Spirits Challenge, scoring 99 out of 100.

Nose : Starts with curry-like spices and especially nutmeg and cinnamon, while a smoky coastalness appears from the back. That is very nice, I think. There’s a mentholy side as well, as well as quite some bitter oranges and a feeling of brine. All nice, and the spices do not dominate, which is cool.

Mouth : It’s big, salty, spicy, and indeed smoky. I find the wood a touch loud (sour spices, ginger) but other than that, the notes of toffee, marmalade, and raisins are making it rather rounder and, well, sexier. Good body, the strength is perfect.

Finish : Long, with bitter herbs and a touch of honeydew. Green liquorice, ginger. The aftertaste has got quite some oak spices. Comments: it’s a big, slightly body-builder Highland Park. Very good, of course 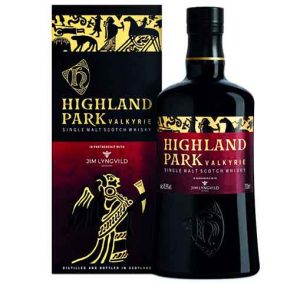