Bunnahabhain Moine is a limited edition, single batch, malt scotch whisky distilled, matured, and bottled at Bunnahabhain, crafted by Master Distiller Ian MacMillan. (Bunnahabhain did release a whisky with the exact same name in the past, but it was a limited edition Olorosso cask release. This one is a whole different thing, just with a similar name)  It is a NAS peated, un-chill filtered with no added color and released at 46.3% abv.

“refreshing with peat, smoke, iodine and diesel…Earthy tones with smoke, peat, iodine and sea air…Finish long and smoky with tar and iodine”

Nose : Nice smoky salty nose.  Some lemons, apples, and peaches as well. Reminds me of Port Charlotte.
Palate : Medium very creamy mouthfeel. Sweet with vanilla, apples, and lemon meringue pie. Brine and gentle smoke.
Finish : Medium short finish. The gentle smoke comes in stronger with time. It also gets more medicinal, reminding me more of Laphroaig on the finish than Port Charlotte. A good amount of black pepper spice as well. The lemons carry through. 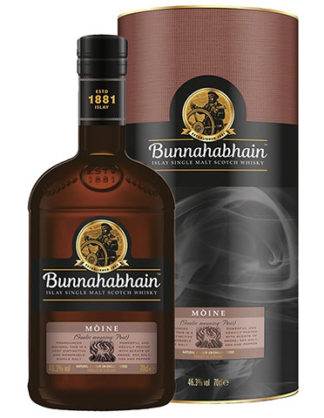